Must Read:Deponia Trilogy Recap and Thoughts

Xbox and Lamborghini Partner for the Next Chapter of Forza

One Upon Light Review

As a gamer, do you ever yearn for a bit of whimsy in your life? Do you ever want to play a colourful, vivid game that cracks jokes all the time and isn’t afraid to pull a fast one on you to keep you entertained? Naturally, such games do exist, but it is my personal belief that they are too few and far between. I’m not jabbing titles that take themselves seriously, mind you, it’s just that sometimes you just want to lean back and relax with a funny story or two. If you share this opinion as well, Overfall is the game for you.

Before going onto the whimsical qualities of this game, let me assure you that Overfall is decidedly not too easy, and may well beat you into submission lest you play with a certain amount of respect for its randomized storytelling elements. At its core, Overfall is an overworld-focused RPG with a turn-based combat module. It has all of the mechanics and features you may expect from one such title – moving across a vast game world filled with quests and enemies, searching for resources, upgrading your characters and completing missions, an ocassional combat sequence etc. It’s all pretty standard on paper, but as soon as you actually begin your first adventure, you’ll see just how different Overfall is.

Upon selecting your characters, their weapons and some basic information concerning them, you’ll appear on an island greeted by a strange old geezer who’ll tell you that you’ve been missing for hundreds of years and now have to find the Everking, who has either disappeared or gone into hiding for some reason. First thing you’ll likely notice is that there’s no moving around outside of combat. Character interaction is conveyed via reaction bubbles, each of which contains an answer or a reaction to something a relevant NPC has said or done. Thankfully, you’ll see the entire sentence the reaction bubble will lead to if you hover your mouse pointer over it, so you always have control over any given interaction. After a short introduction and getting to grips with your characters’ personalities, you’ll literally embark on your journey.

Each island holds a story.

Naturally, the old geezer will give you a task you can follow or ignore, depending on your mood on that day, but as soon as you leave the first island you’ll likely be amazed by the amount of locations that can be found in Overfall. From what I can tell, there are hundreds upon hundreds of islands – each containing a randomized ‘story’ – you can interact with, and even though the entire sequence of communication is usually fairly limited in and of itself, the amount of content present in Overfall is impressive all the same. I say limited, but it’s important to consider the context: as I said, each island contains a story, but that’s virtually all it contains. Sometimes, you’ll jump through a couple of different screens as the given quest progresses, but that’s virtually all you’ll do. For example, on an Inn island most of the time all you’ll be able to do is play some simple games such as rock, paper, scissors, stock up your food supplies (which heal your heroes) and maybe take up a quest. If you decide you’re done with that particular set of interactions and leave, you cannot come back. I’m not sure if this is supposed to be the case with every single island, and while I did not like the finality this gameplay decision left me with at first, in time I’ve grown to applaud the way in which the developers have made me keep going forward.

The reason why I’m content with that is because there’s no sense in playing a single story forever. As you move on, you’ll encounter different characters, some of which will inevitably offer to join your cause. You can only ever choose two heroes at the start of the game, and as you progress you’ll find more and more of them that will then unlock for the next time you begin a game of Overfall. Aside from heroes, there are the more expendable mercenaries that will also help you on your journey, and there’s a metric tonne of classes for these guys. It does take a while to get to grips with all the party customizations you’ll come across as you go along, but none of this is ever too complex or unintuitive.

Well, this is going to end well..

Most of the encounters can and perhaps will be solved peacefully, through dialogue and even a joke or two more often than not. However, when diplomacy fails, Overfall has you covered. The combat system places a grid of nodes on the stage you’re fighting on and sets up turns depending on each combatant’s speed or some such attribute. These are almost always small, focused situations with rarely more than three fighters on each side, but they’re executed really, really well. See, each character has three phases to go through before wrapping up his or her move. First, you’ll move across the battlefield – whether by walking, leaping or teleporting, it doesn’t matter. If it’s a mobility skill, you’ll use it first. Once you’ve moved, you’ll have a chance to buff your character roster in some way. For example, a healer of your group may apply Aegis buffs to your heroes. Similarly, a berserker-type character may debuff his enemies instead. Once all of that is done, comes actual damage-dealing via numerous attacks that depend on your weapon selection. Each character/hero has three skills to choose from in each phase, and all enemies act within the same framework to ensure fair combat encounters… most of the time. There’s a chance you’ll encounter an overpowered combat party you cannot evade on your very first island, but that’s one of the downsides of creating such a randomized gameplay mechanic. Fret not, I only had this happen to me once, and I was deliberately chasing down an enemy ship to see what reaction they would have.

Now, you’ve got to be wondering, if each island is a story, and these stories are pre-made and then randomly strewn around the Overfall’s overworld, they’re bound to start repeating after you’ve seen them all. And yes, you are correct in this regard, even though after seven hours I’m yet to see this happen (I do have the memory of a fish, mind you). This is where the game’s phenomenal Steam integration and player creativity come into play. Overfall has an integrated editing tool where you can easily create your own island, and of course, share it with the rest of the players via Workshop. With the game having barely been released via Early Access, there’s already a fair amount of Stories to download and add to your collection. Kudos to devs for implementing this so early in the game’s life.

I won’t spend many words on the technicals until the game goes gold, but I will say that this is where the whimsy comes into play. Overfall is cute and inviting however you look at it. Even the most ‘terrifying’ creature is still an adorable miniature with an oversized head, and the soundtrack follows suit. The game is a marvel to look and and listen to, and I’m really interested in seeing how it will all mesh upon release. Better yet, it will run even on truly old computers, so those of you who are stuck with a potato can enjoy this phenomenal RPG without an issue.

As mentioned above, Overfall has only just been released on Early Access after a successful Kickstarter campaign, and after spending a couple of hours with the game I’m certain of the developers’ ability to make this a game to remember. If you’re curious about the concept yet uncertain whether it’s worth the entry fee – rest assured that it is.

Filip "Gale" Galekovic
PC EDITOR AT MOUSE N JOYPAD. A former freelancer with a startling dedication towards gaming and writing - where neither is more prevalent than the other. Having been working at Mouse N Joypad for a while now, I get to boss people around as the supreme Overlord of the PC minion squad (not the yellow lame ones, mind you).
You might also like
AdventureEarly AccessPC
MORE
Read More
50428 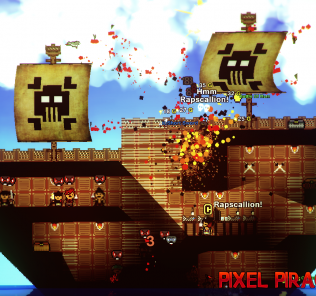 DiRT RALLY TRAILER PUTS COMMUNITY IN THE DRIVING SEAT
Next