Tristoy is a new co-op game on steam greenlight. It’s artwork is hand drawn, it has many dialogue choices that affect gameplay, and it throws you into the heart of conflict right from the get go. You are the prince of some foreign land who has been captured by the Iron Kingdom. A Witch tortures you for a confession to an unknown crime with a gruesome and deadly penalty. As a player you can object or submit or quietly endure the proceedings and I am told that these decisions will have consequences. The Prince is in great pain, the Witch cackles, and I was beginning to think this was set up for another character entirely. Then in the most metal display of wizardry I have seen since Gandalf murdered a Balrog in Moria, a giant glowing skull busts through a brick wall and blasts my torturer away while shouting “INKKKK!!!!!”. 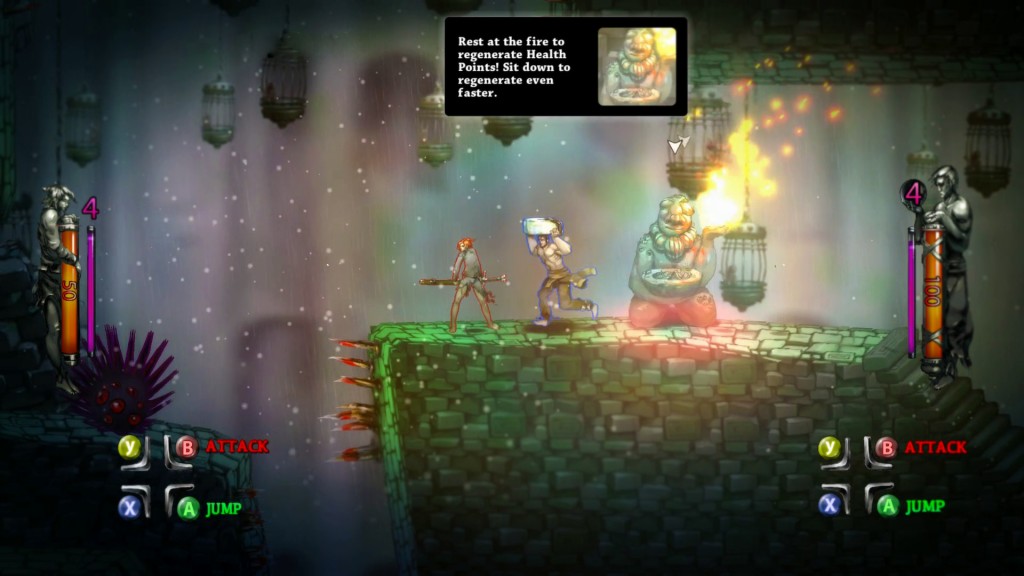 afterwards, and while I can’t say I knew what was going on, I was compelled to find out. Tristoy does a remarkable job of establishing a sense of place even with a relatively low budget. The last game world I remember being this intrigued by was Dragleic of Dark Souls two. It’s atmosphere within Tristoy isn’t quite as absorbing, but it certainly comes close. Tristoy’s story is one that I wanted to unravel. It has a clever remembered dialogue system taken straight out of an RPG. If you are personally interested in the lore behind an environment or character you have the option to investigate. Tristoy’s creators are clever enough to keep cut scene short, and give the player a lot of control over how much information they want at once.

Tristoy is a puzzle platformer that demands two players. It is inoperable with more or less. The good news is the puzzles take full advantage of two players in a way that I don’t normally see outside of cooperative board games. The bad news is if you don’t have someone to play with you are SOL. I did try to play a bit of it with a hand on each side of the keyboard, but that made for a more difficult experience than Tristoy’s developers likely intended. For my preview session I was accompanied by my friend Greg, a Smash Brothers and MTG enthusiast. With my laptop hooked up to my television, and only one wireless pc controller I had to turn to an interesting feature provided by the developers called Uniplay. Uniplay allows your android cell phone to act as a controller over wi-fi. It worked pretty this this games as it is presented in 2D, though a controller was still preferable.

In Tristoy one player takes control of a Prince. A man who exists in the material plain, and is therefore capable of interacting with solid objects and levers. The other player posses a ghostly Wizard who is capable of casting spells and falling to deathly traps without eating into the Prince’s pool of lives. The Prince has quick martial attacks, and the Wizard has slow ranged attacks. Not only do the characters play well off of each other’s abilities, but the enemies in Tristoy often require a combination of attacks from both players to defeat. Like enemies, puzzles really play off the abilities of each character in ways you don’t see in most co-op focused games. You won’t be giving each other boosts to air vents to unlock doors, there is variation and thought involved.

Perhaps one of my favorite features of the game is that the Wizard, in his astral form, can die as many times as he likes with little to no penalty. Since he is in his astral form at the beginning of the game, that let’s both players experiment and get a stronger sense of the game’s mechanics before it throws you into into the deep end.

Tristoy’s emphasis on interesting characters and continuity enhances the experience. Characters are varied, some of them aren’t human. My friend Greg had a battle of riddles with a giant sphinx. After defeating a floating spider creature, instead of a magical chest appearing, a man pulled himself out of a pit and offered us our reward. Tristoy is able to stay true to its story and environment, often coming up with unconventional ways to keep gameplay satisfying. When I play Tristoy, I feel like I’m adventuring in a way I don’t often experience outside of a good D&D session. Sure, some of the magic might wear off after multiple playthoughs. But the strong balance of creative linear narrative and player input make for a hell of a good ride the first time around. The magic of Tristoy is that it is well designed, yet incredibly varied. It isn’t the tightest platformer I have played, it doesn’t have the the deepest combat, and the puzzles aren’t typically head scratchers. But the well balanced combination of all of these aspects coupled with the intriguing, dynamic narrative, makes for an experience that is greater than the sum of its parts. Even if the game’s music is repetitive, we likely be too busy laughing and chatting about solutions to puzzles to care. I’m really impressed with Tristoy, and I’m going to be bugging Greg again tonight, to see if he wants to play more.

The build Tristoy I played was unfinished, and as such it contained some bugs. In one instance a recently defeated mid-game electric spider boss reappeared, invisible, and squashed us while we attempted to retrieve a quest item. We were unable to move past that point. Given the fact the Tristoy launches in a month and some change, I wouldn’t worry too much about this bug being present in the final version. In out playtime we experienced no additional bugs.

Even with the dark fantasy themes,the grim story, and the anime inspired full motion cut scenes, Tristoy reminds me of classic fantasy literature more than many of it’s contemporaries. I can’t tell you the last time a game put me in a riddling competition. It’s set in a world that inspires curiosity, with characters that have interesting motivation, and choices that allow you to express and define your role in it. There may not be number or leveling, but Tristoy is a role playing game in the truest sense. I’ll be coming back to Tristoy upon it’s full release. What I have played so far is very good, and I’m in to deep to not know what happens next.

I have been playing games since my parents made the mistake of purchasing a Sega Dreamcast. 13 years after its demise I still wander the wastes as a keyboard cowboy, gaming on Pc, but looking for a console I can call home. In college I was abducted by tabletop rpg gamers, and even after escaping, the brainwashings have kept me compulsively rolling dice on tables. I am writing this all in California, which is quickly becoming a desert. Catch me on twitter @wmkesner.
You might also like
GamesGamingPC

by Jordan Hall on February 8, 2015
Slasher Vol. 1: Summer Camp Cast and Details Revealed   News came out earlier this week that we will be getting our chance to play a pseudo Jason Voorhees this year — hacking, slashing, and non-speaking his way through a bunch of unsuspecting teenagers at a summer camp. While this is not an “official” Friday […]
68%

by Johnny on February 8, 2015
Game Of Thrones Episode 2 Review The Lost Lords   When I first downloaded the second episode of Game Of Thrones by Telltale, it simply would not work, for whatever reason this episode had problems starting on my Xbox One that continued for a few days. This problem, as I soon found out, was down […]

by Tickles on February 7, 2015
Let’s Play Dying Light Source of the Epidemic Side Mission     The city of Harran is in turmoil, an infection plagues its people transforming them from the ordinary participants in their everyday lives into ravenous cannibals, intent only on their insatiable hunger and their untempered aggression. The city lies in ruins, the few scattered […]

by Gale on February 6, 2015
Dead Synchronicity: Tomorrow Comes Today Preview       Dead Synchronicity is terrifying. It’s terrifying for all the right reasons, at that. Instead of pulling a fast one in the horror department, Fictiorama Studios opted for slow, deliberate dread. Gruesome discoveries, heart-breaking side-stories and horror that slowly settles into your bones is what it’s all […]
Comments
Leave a reply